The corporate philosophy of Mikuni Corporation (the "Company") is to contribute to the creation of a prosperous society, and our goal is to become a sustainable, highly profitable company based on "monozukuri" *.
In terms of corporate governance, we believe it is important to establish and operate a system that is appropriate for our corporate philosophy and the corporate image we are aiming for.
*"Monozukuri" is a Japanese term to describe the process of creating superior products through the pride of workmanship, manufacturing excellence, and continuous improvement.

With regard to our corporate governance system, the Board of Directors, consisting of directors who are familiar with Mikuni's business, and independent outside directors, makes decisions on and supervises the execution of business operations, while the Audit and Supervisory Board which has the right to audit, fairly audits the execution of duties by the directors.
The Nomination and Remuneration Advisory Committee, which consists of a majority of independent outside directors, advises the Board of Directors on the nomination and remuneration of senior management, directors, and Executive Officers, in consultation with the Board of Directors.
In addition to the above, in order to make use of deep insights from outside the Company, we have established an "Opinion Exchange Meeting" with outside directors, corporate auditors, and representative directors to discuss particularly important matters.
We have adopted an executive officer system for efficient business execution and the clarification of responsibilities, in addition to promoting delegation of authority to the Executive Officers.
In order to ensure the appropriateness of operations, the Compliance Committee, which consists of directors, Executive Officers, and other members, has created the Compliance Code of Conduct and confirms compliance through educational activities.
Similarly, the Risk Management Committee analyzes the factors that contribute to the occurrence of risk and conducts drills to minimize losses in the event that risk materializes, thereby establishing a risk management system.

1.Board of Directors
Our Board of Directors consists of five directors, who are familiar with the Company's operations, and five independent outside directors, and in principle, meets once a month or occasionally as needed. The Board of Directors makes decisions and supervises the execution of operations and responds appropriately to changes in the business environment from a medium- to long-term perspective.
2.Executive Officer System
We have adopted an executive officer system for efficient execution and clarification of responsibilities, in addition to delegating authority to the Executive Officers. The Executive Officers consist of 15 members, including the President and CEO, and meetings are held once a month in principal or occasionally as needed.
3.Auditors
Four corporate auditors (three of whom are outside corporate auditors) attend meetings of the Board of Directors, Executive Officers, and other important meetings as an independent body within the company in order to audit the legality of directors' execution of duties and the design and operation of internal controls, as well as to collaborate with the accounting auditor. In addition, in order to improve the audit function, the corporate auditors regularly hold an "Opinion Exchange Meeting" with the representative directors to exchange opinions and information.

We have adopted a corporate governance system with an Audit and Supervisory Board based on the following framework that is appropriate for Mikuni: the Board of Directors, consisting of directors who are familiar with Mikuni's business, and independent outside directors, jointly makes decisions and supervises the execution of business operations, while corporate auditors, who have the right to audit, fairly audit the directors' execution of their duties. To make use of deep insights from outside the company when considering important matters, we have established meetings to exchange opinions with outside directors, corporate auditors, and the representative directors. 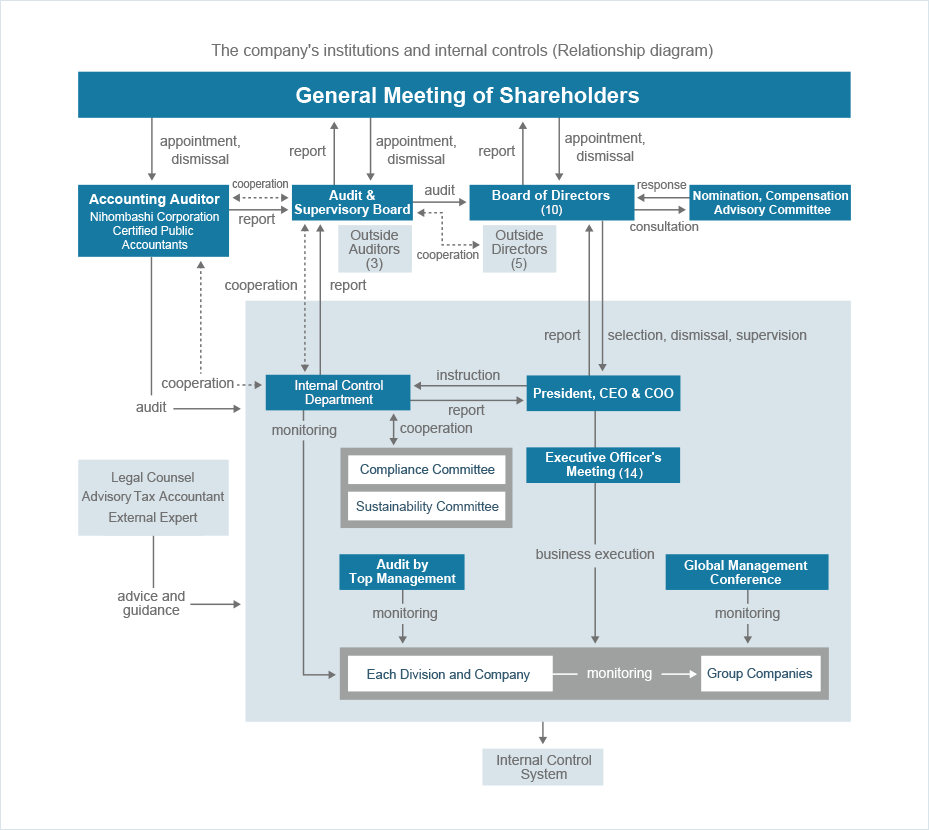